8 Success Stories You May Have Missed in February 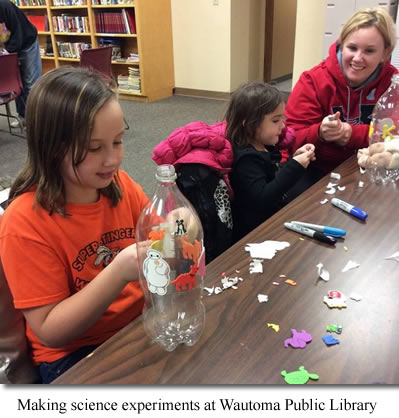 ⇒ Ripon Public Library is planning after-hours NERF™ Battles for both teens and adults. "Outfit yourself with a NERF™ gun and then release your stress with a game of zombies vs. humans & more during this adults-only event. Perfect for busy parents who are in need of some adult time or college students who need a study break! NERF™ guns, 'Elite' ammo, glow sticks, and snacks provided."

⇒ Neenah Public Library's new 3D printer created heart pendants on February 14th, and people of all ages were invited to stop by to create a necklace to take home to a valentine.

⇒ Oxford Public Library is planning a 4-session Calligraphy Class in March: "Inviting all homebodies! Inviting all folks with illegible handwriting! Inviting all who want to just get out and try something new!"

⇒ All proceeds from the Great Menasha Library Chili Cook-Off benefitted the library; tickets sold for $20 in advance and $160 for a table. Attendees voted for the community's best chili, rerpresented by entries from over a dozen area restaurants. The event was sponsored by 16 local businesses, and included a silent auction of literary-themed gift baskets.

⇒ The Mill Pond Public Library in Kingston held an Adult Coloring Class which was very well-attended despite the winter weather. Now those works of art are on display through March 5th so people can vote on their favorites; everyone pays penny a vote, and you can "vote as often and as much as you would like. The two pictures with the most amount of votes will win.  First prize will be an Animal Kingdom coloring book, and 2nd prize is a set of colored pencils and a sharpener."

⇒ Wautoma Public Library collaborated with UW Extension to host programs every Monday in February, so kids grades 3-8 could build science experiments that included paper airplane challenges, aqua rockets, popsicle stick catapults, and making flashlights. And every Monday in March, Plainfield Public Library will be offering these STEAM events for their community as well.