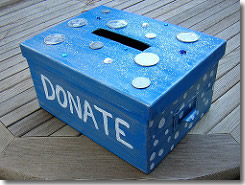 A question was posted on the PUBLIB discussion group asking, "Has anyone experimented with fundraising by having cash donation boxes inside library locations (like what might be seen in a zoo, museum, or simliar)? We are looking for pros and cons of such a set up as well as potential vendors for secure boxes."

Here are some replies that include ideas you might want to try in your library: