6 Success Stories You May Have Missed in December 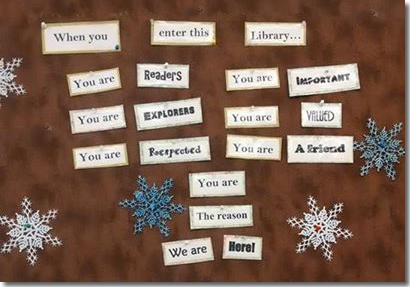 ⇒ Winneconne Public Library revised their winter preschool storytime format to turn it into stealth programming with "Make 'N' Take Storytime" — themed storybooks and coordinating crafts are available all day, and patrons can enjoy the books and crafts at their convenience. They also collaborated with the Winneconne HIgh School Student Council to host a Scholastic Book Fair to raise funds for the library's 2015 Summer Reading Program.

⇒ Princeton Public Library held a "homemade by locals, organized by the Friends" Cookie Walk Fundraiser, and the Mill Pond Library in Kingston raised $1246 from their 16th Annual Cookie Walk.

⇒ Caestecker Public Library in Green Lake promoted Giving Tuesday by encouraging people to "consider donating your time, talent, or treasure to a local group working to better your community. Whether you choose to give to the animal shelter or Downtown Renewal, the food pantry or the Opera House, the library, or the Angel Tree program is immaterial. Just give, if you can."  Giving Tuesday is observed on the Tuesday after Thanksgiving, and began in 2012 as a response to commercialization and consumerism in the post-Thanksgiving season.

⇒ The Fond du Lac Public Library partnered with Mountain Dog Media and Taco Bell of Fond du Lac to provide Christmas story radio broadcasts, as Sarah Newton (head of the Children’s and Teen Services Department) read aloud from the book When Santa Fell to Earth.  The 21-chapter story was read aloud on local radio stations K107.1-FM and KFIZ-AM each weekday at 7:15am, and was posted daily at www.kfiz.com where the whole broadcast can be heard.  "Newton said the radio broadcasts are a great opportunity for families and young readers to read along; several copies of When Santa Fell to Earth are available at the library for checkout."

⇒ Campbellsport Public Library created an Awesome Box that was soon overflowing with suggestions of good reads suggested by patrons. Here's how it works: "Anytime you read something particularly awesome, entertaining, inspirational or valuable when you return it to the library drop it in the Awesome Box on the counter. It lets other patrons know what Campbellsport readers are finding awesome, and those returned books are then available for checkout."  They also had a Pampered Chef fundraiser at which 20% of all proceeds from sales were donated to the library.