Attract a New Audience to Your Library With a Comic Con 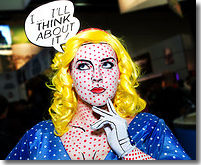 Hmmm... next May might be a good time to hold a comic con — maybe as part of a Star Wars Day celebration on May the 4th (as in May the Fourth Be With You), or on Free Comic Book Day (a worldwide event held the first Saturday in May, when free comics aimed at new readers are handed out.)

There's an article over at Publishers Weekly titled How to Throw a Comic Con at Your Library that'll give you ideas; here are some snippets:

Over the past few years, there’s been an explosion in attendance and enthusiasm for comic book conventions around the world. At the same time, graphic novels have become one of the hottest categories at U.S. libraries. It’s no surprise, then, that comics-themed events at libraries are drawing crowds.

The events range from simple author appearances to huge multiday international affairs, such as the Toronto Comic Art Festival, held at the Toronto Reference Library, which drew 18,000 in 2013. Libraries are hosting scholarly comics symposia and participating in Free Comic Book Day, a worldwide event held the first Saturday in May, when free comics aimed at new readers are handed out. And there are even more singularly creative events—some involving partnering with local retailers and Star Wars cosplayers. [re: cosplayers, see my note below]

And here are some tidbits from the article:

Read the full article How to Throw a Comic Con at Your Library to get all the details, plus all the tips and tricks for putting on your own comic con.

• Hat tip to Ten Great Event Ideas for Your Public Library
• Image credit: the photo "Comic-Con 2011 - I...I'll Think About It / Lichtenstein" on Flickr is copyright (c) 2011 Tony Aceves, and made available under an Attribution-NonCommercial 2.0 Generic (CC BY-NC 2.0) Creative Commons license