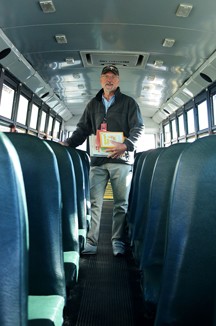 Driving Kids to Read: Southern Door Bus Drivers on Board With Books — what a great story!  Could you work with your local bus drivers to see if you could replicate this in your community?

But if not, maybe you could send your extra children's books to Ted to add to his bus!

Here are some excerpts from the article: