Try Food for Fines Monthly to Support Your Community 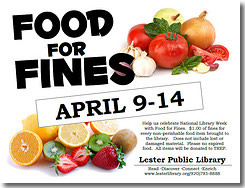 Lots of libraries do a Food for Fines week, especially during National Library Week.  But consider collaborating with a food pantry in your community, to offer a Food For Fines day on a more frequent basis.

Here's how it works at the Jefferson County (MO) Library: