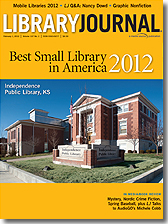 Read Best Small Library in America 2012: The Independence Public Library, KS to learn how the library's small staff of 8 strove to save it from closure, by building relationships within the community and with local legislators.

After just two years, IPL ... has been reborn. It has won awards, garnered grants and increased tax millage, and built programs and services that are “packing ’em in” to 220 Maple Street from all over Independence. So dramatic was the transformation ...

Here are some of the resources & techniques the library used to resurrect itself:

And here's an example of how the library builds partnerships in the community:

When staff attend events or hear a speaker they try to connect. They always ask chamber of commerce members if they can bring something to IPL. For instance, a local candle shop offered a workshop on candle-making at IPL, and an organic farmer led a presentation on gardening. The Kansas Migrant Eduction program offers ESL and now conversational English classes at IPL, and the Southeast Kansas Area Council on Aging uses the IPL computer lab for sessions on how to register for Medicare Part C and D. That partnering and community engagement is how we are able to provide as many programs as we do with just eight staff members.